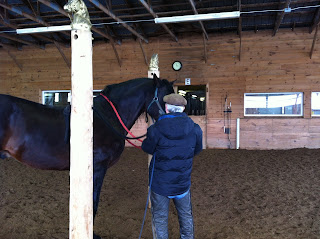 Where in North America does one go to study airs above the ground? To learn more about the most sophisticated classical dressage movements, and the art of horse-back riding at its most cultivated? Grelo Farms, next door in Caledon is actively engaged in training horses and riders to the highest standards on a day to day basis.

hoofbeats! (radio+) club had a chance to visit for interviews and to watch the training sessions in process. It is a rare riding school indeed, that allows development in handling oneself with mares and stallions in the same arena, or participating in a musical ride with exacting standards of space, rhythm, form and symmetry. Beyond piourette, passage and half pass, hoofbeats radio found it truly exceptional to visit a facility experienced in capriole, courbette, and the levade…

Haute Ecole is largely accepted as the highest level of artistry in riding, beyond even Grand Prix Dressage. Classical dressage is a fluid art form that requires us to control ourselves as well as the movement of the horse with a finesse that only after years of dedication can we aspire to more than the occasional moment of perfection. The origins of classical dressage and collection lie in the natural ability of the horse, and its movements in the wild, in fact the goal is to have the horse perform under saddle with the degree of athleticism and grace that it naturally shows when free.

Frank Grelo might have started riding before he was born. His mother was a horsewoman and his father was an actual cavalry man, who moved in equestrian circles full of icons. In his youth, he worked with his father as a blacksmith, and could even shoe a cow. Did you know cattle were often shod back in the day? Grelo has no shortage of interesting history to share.

The stable tradition for humans on the farm, is a kiss on each cheek in greeting. It seems to be a real farm family... Imagine travelling to France, Portugal, Spain and Vienna, as a group of 23 equestrians, to explore the four best riding schools in the world! Riders studying under Grelo's tutelage made memories with a recent trip to celebrate his 70th birthday, recently.

Here at home, Frank and his dancing horses have appeared in movies, television commercials and print advertising; and he has performed to audiences worldwide. It's always a delight to see Frank's most senior ecuyeres, daughters Melissa and Rosanna, accompanying him at public appearances.  They too, are afflicted with what Frank refers to as the horse "sickness."  A disease that has plagued humans forever? Horses were known to humans as far back as shown by cave paintings.  And the Grelos seem extraordinarily well versed in the history of horses that were trained to perform a number of airs above the ground movements, which could enable their riders to escape if surrounded, or to fight more easily, on the battlefields of history.

Today, usually a horse will only be trained in one air, and only if it is particularly able.  Bullfighting on horseback and displays of high school dressage were common entertainment for the Portuguese gentry at one point in time, and apparently suitable equines are still used in bloodless bullfighting today, where it is expected that neither horse or bull will be injured.

Grelo has spent a life developing a breed of horse, Litsuano, with convex facial profiles, heavy muscling, intelligent and willing natures, thick manes and tail,s shoulders that are muscular and sloping and a deep, broad chest. The horses have short, strong backs and rounded, sloped croups, with agile and elevated movement.high-stepping gait. His daughter Rosanna

Voice over for video:
When hoofbeats! (radio+) visited, he demonstrated some in-hand exercises, including:

The Spanish Walk - a trained movement performed by a horse. While at a walk, as the horse raises each foreleg off the ground, it lifts the leg in an exaggerated upward and forward manner.

The Piaffe - is a dressage movement where the horse is in a highly collected and cadenced trot, in place or nearly in place.  The center of gravity of the horse should be more towards the hind end, with the hindquarters slightly lowered and great bending of the joints in the hind legs. The front end of the horse is highly mobile, free, and light, with great flexion in the joints of the front legs, and the horse remains light in the hand. The horse should retain a clear and even rhythm, show great impulsion, and ideally should have a moment of suspension between the foot falls. As in all dressage, the horse should perform in a calm manner and remain on the bit with a round back. The piaffe was originally used in battle to keep the horse focused, warm, and moving, ready to move forward into battle.

The Levade - first taught at the beginning of the 20th century, asking the horse to hold a position approximately 30-35 degrees from the ground. Unlike the pesade, which is more of a test of balance, the decreased angle makes the levade an extremely strenuous position to hold, and requires a greater effort from the horse. Therefore, many horses are not capable of a good-quality levade. The levade is also a transition movement between work on the ground and the airs above the ground. Neither of these movements are equivalent to rearing, as they require precise control, excellent balance, and a great deal of strength, and are the product of correct training, rather than resistance from the horse. The horse is asked to enter the levade from the piaffe, which gives the viewer the impression that the horse appears to sink down in back and rise in front. The position is held for a number of seconds, and then the horse quietly puts the forelegs back on the ground and proceeds at the walk, or stands at the halt. The levade is considered to be pinnacle of collection, as the horse carries all weight on the back legs, and has an extreme tucking of the hindquarters and coiling of the loins. powerfully conformed hindquarters, which allow them the strength to perform these difficult movements. 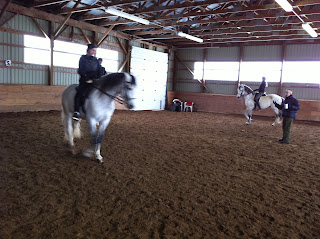 Tune in to 93.3 fm in Guelph Sunday, March 10th at 9:30am to hear what we learned from Rosanna Grelo, who has been a part of the Cavalia show, in addition to her amazing and unique horse-work at home.
Email ThisBlogThis!Share to TwitterShare to FacebookShare to Pinterest