The News is Out! 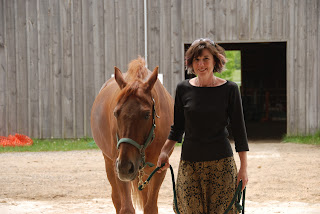 
– Canadian rider Kim Logue may just be the biggest fan of Combined Driver Chester Weber, a fact she proved when she won a once-in-a-lifetime opportunity to spend two days on Weber’s Live Oak Plantation in Ocala, Florida, training with the legendary combined driver.  Logue won the contest on the Gift of the Horse website by writing an award winning essay explaining why she is Weber’s biggest fan.

In her winning essay she said, “Chester Weber is a champion many times over, but there are other reasons I am his number one fan. He has been the introduction to the sport of Combined Driving, not just for me, but also for countless enthusiasts. I can vividly remember an entrancing demo during the Symphony of the Horse Charity Fundraiser in Gainesville, Florida where he was wearing a headset mic and whipping around the arena describing the sport in general, as well as the specific methods he was using moment by moment, with his team in action, to give a taste of the sport.”

Logue said she was impressed to see Weber’s calm composure and patience after many delays due to the heat while waiting his turn for the cones phase at the 2010 World Equestrian Games.  “Not to mention the team spirit shown in the way he cheered for his US teammates, ringside smiling and fist in the air!” Logue said, adding that she finds Weber to be approachable, friendly and down to earth.

Logue describes herself as a grass roots eventer, who grew up on rescue horses and borrowed ponies, a bond she shares with the iconic driver. Weber is well known for rescuing his horse Jamaica from a slaughterhouse before giving the celebrated horse a second career in which he won countless world championships. “The chance to train with Chester for a weekend means the world to me,” Logue said.

Weber, the United States’ most decorated combined driver, said he was pleased to be taking part in the Gift of the Horse contest. “I love the sport of combined driving and sharing my passion and expertise with others is something I love doing. The great thing about the Gift of the Horse is all the money raised on the website goes directly to the American Youth Horse Council. I certainly look forward to meeting Kim,” Weber said.

For more information on Weber and his combined driving team, visit their website at www.chesterweber.com.

Photo: Kim Logue, an eventer from Canada, is Chester Weber’s biggest fan and won an essay contest on the Gift of the Horse website for a once-in-a-lifetime opportunity to spend two days at Live Oak, training with the legendary combined driver. (Photo courtesy of Ze’ev Gedalof)