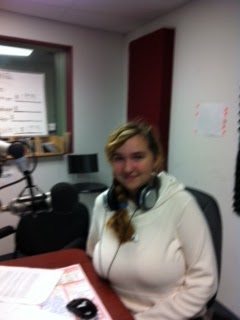 Hey hay,
Thank you for listening to CFRU, 93.3 fm in Guelph. I am your surprise, emergency co-host, Cat, here with Kim Logue in the studio. Welcome to episode #95 of hoofbeats radio, where you can raise your voice! It's the annual fundraising drive for our beloved NCRA station, coming at you from the University of Guelph: CFRU. The number to call in with comments, donations, or pledges is 519-837-2378.

This radio show, Canada's horse talk radio, is nearing its 100th episode. Our milestone/anniversary program will happen shortly after the Royal Winter Fair 2012! Have you herd? If you have missed the Sunday morning 9am shows in the Guelph broadcast area on 93.3fm, past episodes can be found world-wide, anytime: on-line at cfru.ca (choose the program schedule, hoofbeats, archive).

Did you already read it in The Rider? This was intended to be our first live to air broadcast from the Guelph Farmer's Market, where we were not just going to ask for your donations, but your comments. Do you eat horse meat? Would you? Have you ever? When Kim first posted this intended survey question, that was to be put to the public during this special show, some saw former/founding Blue Rodeo member Bob Wiseman expressing his opinons on the horse meat issue and will share some details of several debates as the show progresses.

[ ] 3:58 Market Day, Maria Kasstan from flash drive
Dray may refer to:
Dray, a type of wagon
A dray horse, also known as a draft horse

Hey hay,
Thank you for listening to CFRU, 93.3 fm in Guelph. I am your host Kim Logue with a welcome to episode #95 of hoofbeats radio, where you can raise your voice! It's the annual fundraising drive for the beloved NCRA station at the University of Guelph, so CFRU the number for donations is 519-837-2378.

[ ] Read a comment from the CBC show
"To say that horses experience the slaughterhouse "differently" than pigs or cows or even chickens for that matter, may have some vague truth to it, but in defense of these latter species, it needs to be clarified that pigs DO in fact feel fear, stress, pain and even terror, when subjected to their impending fate. They smell the blood, hear the shrieks of their peers, resist confinement and prodding and even beatings they are forced to endure.


I'm not suggesting horses DON'T experience this also. The fact that horses don't have to endure the horror of a life that pigs do, does not make them any more or less susceptible to the terror of the slaughter house.

I guess my whole point is, whether it's a horse, pig, chicken, seal or dog, to say it is ok to treat one animal with the horror of slaughter and not another is speciesist! I don't condone any of it!"

[ ] update from Horse-Canada survey
[ ]  CFRU commercial, including:  non-profit, non-commerical, alternative radio is important, and not just for the support for local and great new music, but for the in-depth interviews and long-form journalism. for the VARIETY of perspectives we can show.

The NCRA's website states that Community broadcasting serves the needs of socially, culturally, politically and economically disadvantaged groups in society -- an audience that is recognized as being diverse in ethnicity, culture, gender, sexual orientation, age, and physical and mental ability; -- source


[ ] 4:46, Port Town, track 8, Charlotte Cornfield
"last year around this time i was hurtling through the french hills on a horse"

More from the CBC comments section
"A booming North American equine industry, built on the back of sport and companion horses, has inadvertendly created an environment where an overpopulation of sub-par, older, unwanted horses is unavoidable. Faced with a struggling economy, horse owners and enthusiasts cannot possibly financially support the overwhelming number of horses that are the unfortunate byproduct of a vibrant breeding industry. In the face of reports that these horses are found starving, abandoned or inhumanely euthanized because no one can afford to offer them an appropriate quality of life, it shocks me that so-called animal lovers cannot see the kindness and charity in granting them a painless death. In short, if you are talking about banning slaughter, you are picking the wrong fight."