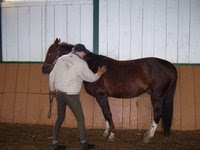 This episode of hoofbeats first aired July 6 2008, and features a discussion with Hans Hollenbach.  Because of recent rumours that a Dutch rider in the 2016 Olympics had to withdraw her horse because of a broken jaw caused by abusive riding, we thought it was timely to replay this interview where he speaks to the common faults of high levels of competition. The horse jobs feature and other news and announcements are out of date, as is the free on-air coaching Kim received about bringing a real live horse to a Hillside workshop, but the perspectives shared are worth hearing!

Hans has founded a renovated and expanded riding facility where horses really enjoy life, and nothing is missing to guarantee the correct training for horses and riders, called Xenora Horse Empowerment, located on the 2nd line in Acton.

Since our conversation, The Heritage Registry of Who’s Who™, a New York based biographical publication, that selects and distinguishes individuals throughout North America who have attained a recognizable degree of success in their field of endeavor and thereby contributing to the growth their industry have featured Hans with some press in 2014.

We will touch on Groundwork Techniques to improve your Dressage, and we will discuss Classic Training, the Roll Kur and some other controversial topics, including the "dreaded" Pesoa that I had been expected to use when working with Olympic team members and helping in the training of their horses.  I had understood that the system is illegal to use, in certain attachments at shows, but knew high level trainers who worked with it at home, to find the results useful. Two breeching lines are attached to point A of the roller, with an elastic tensioner positioned behind horse, level with stifles. Two lines are attached to tensioner and pass through the midpoint on the roller to a pully which attaches to bit at other end. Essentially the horse pulls against himself, and learns to collect in order to release the pressure provided by the tack. It is said to build muscles at trot, and improve balance at canter through engagement of hind quarters.  I found the perspective that Hans shared on all these topics worth hearing!